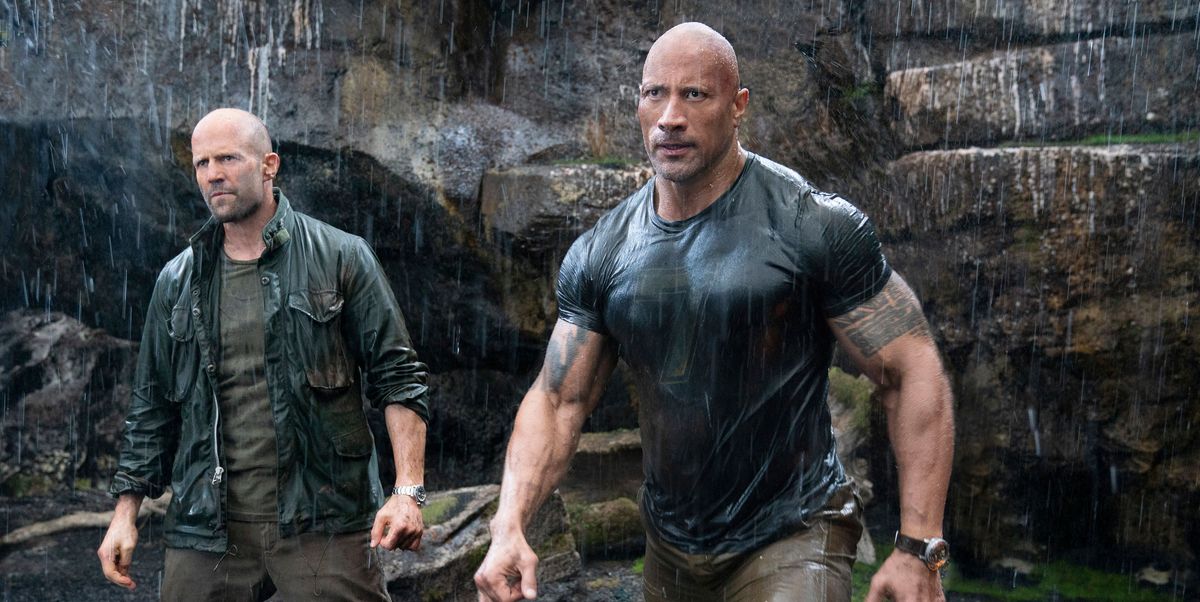 “I’m trying to save the world, which, for the record, will be my fourth time. ‘Cause I’m really good at it.”

Hobbs & Shaw is an action spin-off from the Fast & Furious franchise, directed by David Leitch (Atomic Blonde, Deadpool 2) and starring Dwayne Johnson, Jason Statham, Idris Elba and Vanessa Kirby. When MI6 agent Hattie Shaw (Kirby) injects herself with a deadly virus to keep it from superhuman terrorist Brixton (Elba), familiar characters Hobbs and Shaw are reluctantly assigned as partners to track down Hattie and neutralise the virus.

I’m pretty vocal on my dislike of the Fast & Furious franchise, so the idea of a spin-off starring two of the franchises only interesting characters sounded like a refreshing take on the deficient formula. Whilst I didn’t expect much from Hobbs & Shaw, I began it with no bias and found myself having an incredibly enjoyable time. However, I will get one thing out of the way now: the film has an appalling story! As expected, the “plot” disregards all realism and logic in order to bring the ridiculously over the top action sequences we’ve come to expect. There is also an abundance of clichés and convenience, but the movie is very self-aware and pokes fun at both itself and the genre in multiple jokes, which I found to be an enjoyable deflection.

Where many filmgoers now have a demand for absolute realism, Hobbs & Shaw provides a welcome palate cleanser. The opening scenes lay solid foundations for the underlying tone of the film, as both characters demonstrate their similarities whilst kicking ass and telling one-liners, giving a cheesy 80’s action movie vibe that is rare in todays cinema. Both leads have very different ways of dealing with situations, which the film presents competently and adds to their ongoing conflict that is the heart of the story. The rivalry is the butt of many jokes, some of which don’t land or are strung out for effect, but the ones that do made me laugh out loud and was a frequent reminder that the film shouldn’t be taken too seriously. A handful of surprising cameos had me pointing at the screen shouting “it’s them!”, but the scenes are severely elongated only to make use of the sheer amount of money the studio must have spent to get them there.

Each cast member does a wonderful job with the passable script, but Johnson and Elba excel in their performance. Elba’s villain “Brixton” is as generic as they come, with recycled and senseless dialogue that aims solely to promote how bad he is, but Elba fully embraces the brainless character design and pushes all his efforts into having a good time. When I wasn’t cringing at what he was saying, I was convinced in how he was saying it, which is a testament to Elba’s increasingly undeniable skill as a talented actor. Statham bounces off Johnson well in every scene (which is the very reason these characters were chosen for the spin off!), but fails to stick many of the insults the two trade. I found myself laughing at many of Johnson’s jokes, even when they weren’t funny on paper, only for the laughing to stop dead on Statham’s comebacks. Vanessa Kirby is convincing as Hattie Shaw, particularly during the relationship building scenes opposite Statham, which had me interested in her other filmography and as an actress I will look for in the future.

The action sequences are laughably absurd, which is enjoyable for the first half of this movie. However, there isn’t much in the way of variety, as we see our characters simply punch and kick their way through a stream of bad guys whilst bullets fly by them every now and then. Besides an amusing hallway fight where Statham takes out a small militia as Johnson playfully yawns, there are little to no levels, creativity or story to the grounded sequences. Each action scene spreads this style thinner, which plays for a very uninteresting second act. A change in scenery for the finale was a quick boost of energy that this film desperately needed, but the scenes lean heavily on the themes and set pieces of the larger Fast & Furious franchise, which is deeply disappointing as the film fails to stand on its own. When you realise the runtime is over 2 hours long, Hobbs & Shaw is far from the quick boost of fun that many viewers are looking for.

Where I had a fantastically fun time with the first act, the second is brainless and strung out, only for the third to refashion familiar themes and action sequences that we have come to expect from a Fast & Furious movie. Despite being highly more enjoyable than its predecessors, Hobbs & Shaw’s story expectedly falls short, but is saved by its exciting characters and a charismatic cast. The chemistry between the leads is key to the film’s success, but I found myself grasping tight in an attempt to not be swept away by its monotonous style. I give Hobbs & Shaw a 6/10!