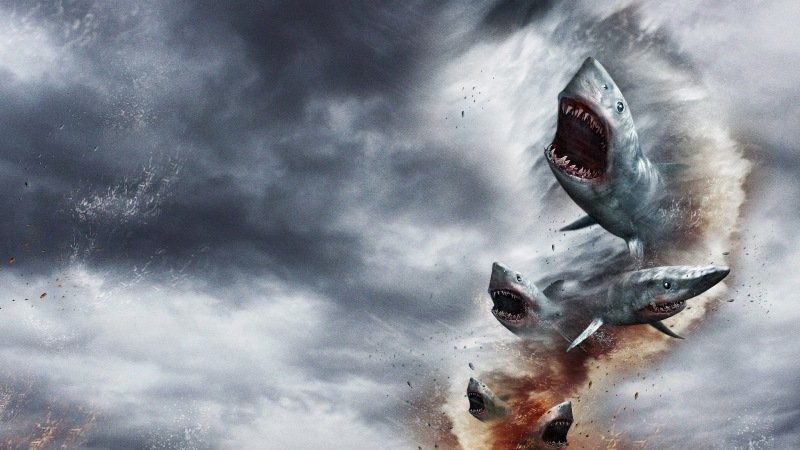 This Sharknado review was suggested by a friend of mine, in which I have since told him we can no longer be friends. With a title and premise like Sharknado, I was expecting a “so bad, it’s good”, enjoyable time waster that should only be viewed drunk and/or with a group of friends. Instead, Sharknado forgets its entire reason for existence to present us with a hot piece of garbage that takes itself way too seriously. Despite reading that its successors remedy this, Sharknado is unbearably bad in every way, to the point that I was in physical pain and begging for the film to end. 1 hour 27 minutes was far too long, but I sat through its entirety so that you don’t have to.

This film is jam packed with characters, none of which are remotely interesting. Fin is our lead, who is repeatedly bashed for being a poor father to his two children, Matt and Claudia. However, we seldom see Fin do anything but risk his life to rescue his children, both of which are pretending they are not in their mid-20’s. Claudia’s boyfriend is a fully grown man, which is incredibly jarring to see as his girlfriend is suggested to be under 18 years old. All jokes aside, I really respect Chuck Hittinger’s portrayal of Matt, Fin’s pilot son. Hittinger’s approach to this character is inspiring, as I now believe literally anyone can make it as an actor. Fin and his ex-wife April are severely disconnected, as she constantly displays a deep resentment for Fin’s shortcomings as a father. April develops no affection for her ex-husband throughout the film, but they end up getting back together to make way for the most contrived romantic sub plot of all time: Matt and Nova. Nova is a barmaid at Fin’s bar, whose sole purpose is to look good and waste shotgun shells when it is convenient, but occasionally forget she has a shotgun to make action sequences more exciting.

Baz is the tank of the group and is essential to the plot, popping in and out of scenes to deliver cool lines and exposition. Baz enjoys telling jokes after brutal shark attacks and dying before he has any resemblance of a character. Finally, we have George who is a drunkard, and that’s all I have to say about George. Out of every character on this incredible roster, none come close to the disastrous Oscar snub that is Robbie, a high school bus driver who came to Hollywood to become an actor. This is the point I lost all faith in Sharknado, as a creepily over-acted Robbie stands alone in the center of a wide shot, waiting to tell an unfunny joke then proceed to die violently. When all else is failing, Sharknado needs at least fun characters to bring the absurdity to life, but they are too many and two dimensional, with not a shred of campy fun shining through.

The film opens with an entirely irrelevant fishing boat scene, in which a character apparently called Palmer is desperate to deliver an intriguing business deal with the Captain of the boat. The deal goes south and Palmer attempts to leave the boat with the Captains money but has absolutely no where to go. The two are on a boat, in the middle of the ocean as a storm circulates with no other method of transportation, so where did he think he was going to go?! It would not matter at all to the story if you remove this scene entirely from the final cut, which is the first and immediate indication that you are in for a bumpy ride.

Sharknado is littered with irrelevance and convenience, like a hardware store being directly opposite the flight school or the storm that seems to turn on and off when the story demands it. Certain creative choices are thrown in last minute, with some strangely placed slow motion and a weird hand gesture from Fin that is supposed to be cool before he blows up a tornado, but was clearly done as a joke by the actor and thrown in for the hell of it. The physics are completely shot, as a house is completely submerged but the driveway and surrounding area are almost dry, or when the team smell gas from the car which explodes with no ignition, surrounded by water. Following this, the crew steal an absurd new car: a truck with a Nos button, which I would be okay with if we got a few exciting action scenes come of it. Unfortunately, we don’t.

Sharknado’s CGI is beyond awful, creating a cartoon environment that is on par with a PlayStation 1 cut scene. I am fairly sure I saw the film use the same CGI shark in two separate scenes, which would offend me if I even remotely cared at this point. The sound editing is so poor that I regularly couldn’t make out what the characters were saying. At first, I thought this was a negative, but after I caught a few lines of dialogue, I realised that I was blessed I couldn’t understand them. Lines are forced to demonstrate a point that is rarely relevant, usually just to try and develop a character or to unnaturally progress the story, but it is not at all goofy or funny, it is just plain bad.

Even the character motivations are surface level, as the team agree to risk their lives to help Fin’s family, as if they haven’t got any friends or family of their own to look out for. None of the extras appear to know what is going on, despite the events being broadcast all over the news, and the film even dares to insert a political statement as a shop owner blames the government for the sharks and the tornadoes. So many characters are crying, screaming, or moaning through most of this movie, but never actually when it is necessary. A character’s boyfriend dies horrifically and nobody seems to care, with the crew having a completely normal conversation after seeing his legs get ripped off by a shark.

Watching Sharknado was a crime against my human rights. Like the cast, I was sleepwalking through the entire movie, as it provides none of the ludicrous fun we would expect from its premise. I understand that this movie was designed to be ludicrous, but it’s still supposed to be fun! Unfortunately, there really is no fun to be had, which had me screaming in disbelief at its Rotten Tomatoes score of 78%! It doesn’t deserve its cult status or a sequel, let alone a franchise. I don’t have an image for 0/10, so I give Sharknado a 1/10!

If you enjoyed this review of Sharknado, please like and share this page. If you agree with this review or, even better, have conflicting opinions, please comment below to open discussions.