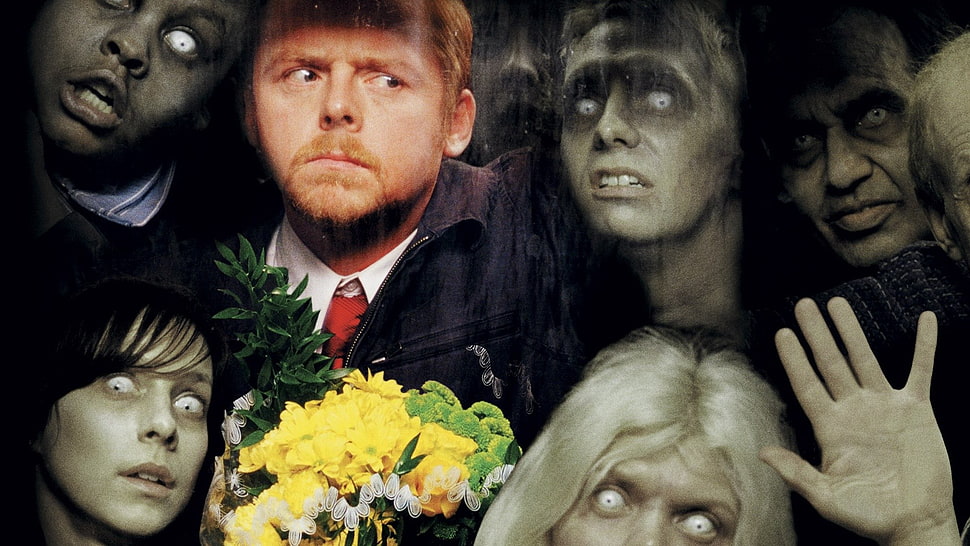 “Go to the Winchester, have a nice cold pint and wait for all this to blow over”

Shaun of the Dead is a 2004 horror / comedy, written and directed by Edgar Wright (Baby Driver, Scott Pilgrim vs. the world), starring Simon Pegg (Co-writer) (Star Trek, Mission Impossible) and Nick Frost (Attack the Block, Fighting with My Family). The film centres around a group of survivors attempting to reach safety from the zombie apocalypse within their local pub, The Winchester.

Before we dive into this review, I want to paint a picture of my first experience watching this movie, as it undoubtedly holds some bias over my review of the film. The year is 2004 and I am nine years old (far too young to be watching this movie by the way). My mum works at Blockbuster and she gets 20 free rentals a month, so she helps my brothers and I choose a selection of movies to watch every weekend were together. This particular weekend its just my mum and I, and she really wants to watch “Shaun of the Dead”, describing it as a “romantic comedy with zombies”. I hear Rom-Com and run to play Sonic Heroes, but she sits me in front of the TV and the rest is history.

Almost everyone has heard of Edgar Wright, Simon Pegg and/or Nick Frost. The three collaborated to bring us the Cornetto Trilogy, with Shaun of the Dead being the first, followed by Hot Fuzz and lastly The World’s End. However, when this film was initially released, the trio were not widely known, and zombie comedies had been tried several times before to varying degrees of success. More recently, we have seen several successful entries into this genre, with films like Zombieland and 2019’s Little Monsters, but it is a complicated task to pull off effectively. Shaun of the Dead approaches this problem by taking its screenplay back to filmmaking basics. Rather than focusing the film on the zombies and the ensuing violence, the film focuses on delivering everyday characters, relationships and obstacles, with the zombies acting more as an additional obstacle for our heroes to overcome.

I say “hero” here lightly, as there are no typical heroes in Shaun of the Dead. Shaun is our main protagonist and he very much follows the “Heroes Journey” style of storytelling (famously used by George Lucas with Luke Skywalker), but he can hardly be compared to a character like, say Tallahassee from Zombieland. Where Shaun (and the remaining cast) excel is in their relatability. He is a regular guy, with regular problems and a mundane lifestyle. Shaun is stuck in an existence that doesn’t fit his potential, on both a personal level and as a born leader. Pegg plays this character with such likability and good nature, but also a level of ignorance and at some points, moronic. His long-time friend, Ed, is the last thing connecting him to his adolescent, college style habits, which should portray Ed as more of an unlikable antagonist. Luckily for us, Ed is played by Nick Frost. Frost elevates this film, not just from a comedy angle, but also standing opposite Pegg, creating a sort of dichotomy between the two characters. The interactions between Shaun and Ed are some of the best lines in the film, with the viewer caring for Ed as a result of the two’s brotherly, love-hate relationship. Everyone has a friend or knows of someone just like Ed, and a line that really sells this is “are there any zombies out there?”. It’s not only hilarious, but exactly what anyone would say put in that situation. It’s grounded, it’s fun and it plays right to Pegg’s defensive characteristics.

Shaun of the Dead uses some creative methods to keep the viewer engaged for the entirety of its run time, one example being shown in Ed’s analysis of The Winchester’s regulars. Ed invents fictitious back stories for all the extras in the scene, which initially plays off as another joke to cheer up Shaun (and the audience!). However, these same actors are hidden in plain sight throughout the movie, returning as either the undead or victims, in addition to almost every extra in this movie. This gives the film depth, creating a more engaging world and subconsciously projects to the viewer that everything is relevant, that no time or character is wasted. Wright develops this with numerous parallels and reoccurring jokes, forming some of the most quotable lines from recent movies. Lines like “you’ve got red on you” and “Big Al says…” stay with you long after the movie, becoming increasingly funnier in each new context they are used. These jokes are layered, well thought out and can even underpin some of the movie’s pivotal moments.

Wright doesn’t waste any time delivering mundane exposition. Instead, the story is subtly drip-fed to the viewer via various mediums. The growing threat is delivered through televisions in Shaun’s workplace, papers and even a radio announcement that I had not noticed in previous viewings. One of the most memorable gags is essentially an exposition dump, in which Shaun flicks through various tv channels to form the sentence that “people are literally being eaten alive”. This is a fun use of creative storytelling that the audience can get behind. It’s witty and doesn’t waste time, leaving more room for the comedy and story progression.

Comedy comes naturally in Shaun of the Dead, but this film also delivers as a legitimate horror. Many of the scares come from threats in the background, demonstrated perfectly in the scene where an armless groom walks into their home, due to the front door being left open. As our two leads sit on the couch eating a Cornetto and watching the news, the shot opens up to view the front door slightly to the left of the screen. The door opens and a zombie trudges slowly towards our leads, creating a knot so tight in your stomach that you can’t help but scream almost as loudly as Shaun. Wright demonstrates the subtle methods of creating both an efficient comedy and horror scene on a superb level. He understands that his zombies are slow and simple, so he regularly drops them in close spaces with our lead characters to create a claustrophobic environment with believability and terror.

Shaun of the Dead works on so many levels. Led by a group of fully fleshed out characters with varying relationships between one another and relatable problems, this horror comedy engages the viewers at an intelligent level that is not usually seen in this genre. Wright ticks every box on the “How to write a good screenplay” list and does it in true style and finesse. I didn’t have to re-watch this film to review it, as I have seen it enough times to re-write the script back to front, but I did it anyway and I’m glad. Shaun of the Dead gets a 10/10!

If you liked this review, please comment or share this post for others. If you have any similar or, even better, conflicting opinions of Shaun of the Dead, please comment to open a healthy debate.