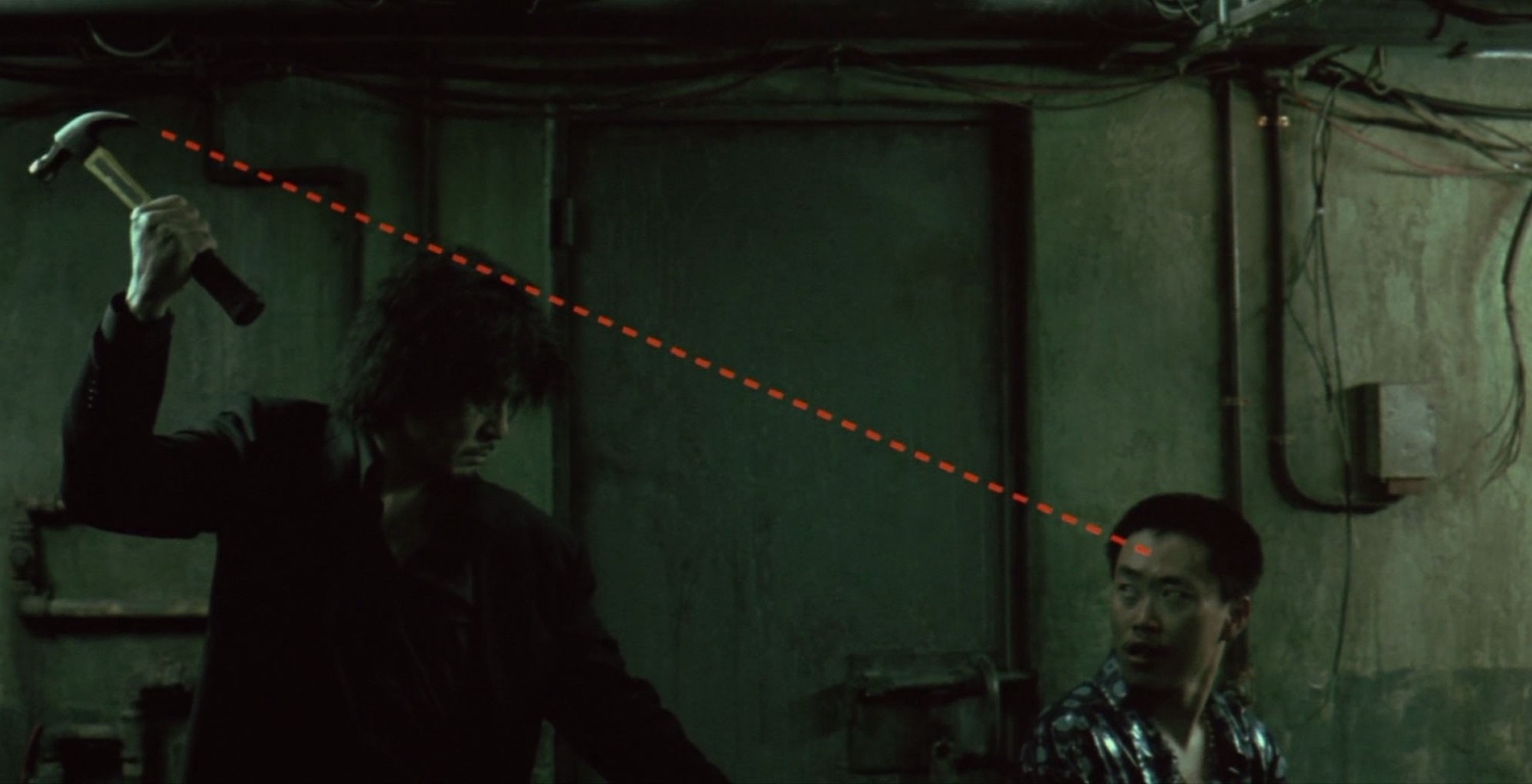 Oldboy (2003) is a South Korean Neo-Noir action thriller, co-written and directed by Park Chan-wook (The Handmaiden, Thirst). The film follows Oh Dae-su (played by Choi Min-sik), a drunkard who is imprisoned for 15 years with no reasoning or explanation from his captors. When Oh Dae-su is unexpectedly released, he begins investigating various leads to uncover who imprisoned him and, more importantly, why?

With a run time just shy of 2 hours, there are a lot of plot threads weaved into Oldboy, with all of them culminating in one of the best plot twists seen in a long time. Not a minute passed where I wasn’t fully invested in this story and its characters, mainly due to the unpredictability of the plot and the idea that we, as the audience, only know as much as the lead

The unpredictability is immediate. From the very first scene, our protagonist is hanging an unknown victim over a rooftop by the man’s tie. Given the theme of revenge underpinning Oldboy (a theme we have seen reworked over and over in recent years), the audience can safely assume that Oh Dae-su has caught up with one of his captors. Later in the film, we come back to this moment and our lead is instead saving an innocent man from suicide, diverting our expectations away from this being another substance-less revenge film. You know the movies I’m getting at, the straight to DVD, bottom shelf at Tesco sequels either starring Steven Seagal or produced by WWE Studios. The one that immediately comes to mind is Kickboxer: Vengeance. They took a reasonably popular solo movie and managed to franchise it for eight movies (yes, I said 8). The film literally has the word Vengeance in its title…

Park Chan-wook knows this, leveraging every chance to divert what you think is happening to what is actually happening. This style gels perfectly with the mystery element, as you can’t turn away for fear of missing something important, but it also propels the story forward and makes it impossible to be bored at any point during the film. Immediately after saving this man’s life just to tell him his story, Oh Dae-su stands up and walks away abruptly, leaving the man to jump to his death with no remorse. In one simple scene, the audience has been subverted twice and we have confirmed a major trait of our protagonist: he isn’t a nice guy. We are not supposed to like Oh Dae-su, but we connect with him because we know as little as he does. He is the vehicle in which we answer 2 burning questions: who and why? Oldboy continues to play with the audience in several scenes, examples including his Shawshank style break out plan (only to be subsequently released) and a torture scene in which the camera focuses on a concealed blade, only for the assailant to be taken away by a phone call.

Good filmmakers understand this principle of “Show, don’t tell”, and Oldboy uses this to near perfect results. In one scene, our protagonist is questioning a lead for information, but the camera focuses on the lady’s knees rather than the conversation. The shot then cuts back to Oh Dae-su looking inquisitively, conveying the information visually that this information is to be important. In isolation, this scene can appear random and creepy, but the movie subtly and visually explains the significance in later scenes. It’s a small detail, but one of hundreds in this movie that gives it a great deal of re-watchability. In opposition to this, Park knows when not to show in a violent scene where a character’s tongue is cut off by a pair of scissors. Oldboy doesn’t shy away from violence, but the camera purposely aims away from the tongue and on the characters hand, gradually pushing down on the scissors in an excruciating scene that will make the squeamish look away

A lot of the intrigue comes from uncovering the conspiracy at the same rate as Oh Dae-su, with director Park Chan-wook telling the story through creative and artistic cinematography. Several voyeuristic shots put you right into the story telling, with one scene adopting some very personal camera work. It depicts a character looking through a broken window to see a couple “getting busy”. Handheld camera work can be avoided by some directors, as it can produce the amateur, low budget style shots of a homemade movie. Oldboy instead uses this to produce the illusion that the audience are looking through the glass and witnessing the scene at the same time as this character. In a way we are, as this character has forgotten this event as it was regarded as “not important”, but shots like these involve us in the movie on a more personal level, which elevates this movie from good to great. This first-person shot is used again in this movie but to different results. When Oh Dae-su holds up some pills to the camera asking what they are for, his love interest Mi-do responds that they are depositories she used to give him medicine, creatively elevating this line to a funnier joke that hits the mark

This film has a lot of story to tell, applying different methods to tell it effectively and engagingly. Truth being told, I am not the biggest fan of flashback scenes. You see so many movies put a different filter on the camera and try very hard to find a way to artificially cut it into the overall movie. Of course, Oldboy finds a way to break the mould, employing creativity and beautiful cinematography to tell a pivotal scene. The scene follows Oh Dae-su chasing his younger self around his old school, as if he is trying to remember this moment for himself. The scene boasts fresh ideas that look fantastic and are a great way to spice-up what could have been a monotonous flashback.

I cannot finish a review of this film without mentioning the famous corridor fight scene. Given that Oldboy was release in 2003, multiple movies and shows have attempted to recreate this one-shot, realistic hallway fight scene (Daredevil Season 1 comes to mind!). You have likely already seen this scene before even watching the movie as it regularly appears on top 10 lists, but if not, you will recognise similarities to so many of its inspired recreations. It’s grounded, gritty and the one-shot element shows real exhaustion from the actors, giving a real believability to every punch. Oh Dae-su isn’t portrayed as an untouchable superhero, so the stakes in this fight feel very real. There is some noticeable choreography that doesn’t quite hit the mark, but you could say this adds to the grounded and erratic nature of the fight. This scene is fantastic, you’ll understand when you see it!

If I must criticise the film in any way, it would be due to the extended third act. After one of cinemas greatest realisations, the film winds down on a heart-breaking scene, seeing characters reach their lowest points in the story and each arch reaching its conclusion. After a shocking death, the story may have been better suited to an open-ended conclusion, following the uncertain and unpredictable style carried throughout the movie. Instead, the film felt somewhat extended with an additional scene. I’m sure there are deeper meanings and analytical points that we can examine from this conclusion, but after the release of all the built-up tension created by not knowing, the last 10 minutes felt a drag compared to pace of the preceding film.

Oldboy boasts so many impressive feats that solidifies its cult following. Strange, violent and powerful, Oldboy covers multiple genres with confidence and class. The sheer mass of movie cannot be soaked up in one viewing, making it highly rewatchable. It covers topics that will have analytical viewers diving into the deeper themes, whilst not excluding the everyday movie viewer just there to see an exciting film. I give Oldboy (2003) a 9/10!